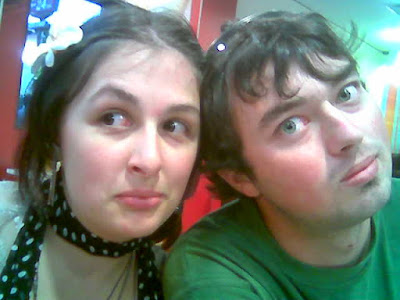 Ten years ago yesterday, the Umbilical Brothers were in town and I got together with a group of friends to go see them. I don't remember any part of the show, but I do remember a few things about that night.
1. I was sitting behind my cousin Julie - and did not know that this would be one of the last times I would ever have a conversation with her.
2. I got to meet the Umbilical Brothers after the show. My friends disappeared momentarily and I wanted a photo with the guys, so they took it in turns taking photos of me on my little blue flip phone.
3. I got a lift home from my good friend Chris.

I was desperately, not-so-secretly in love with Chris. He parked outside my house, and we got out of the car and commenced a chin-pinch fight, as we had recently started doing at the end of many evenings. These fights involved each of us trying to gently pinch the other's chin, and they were epic, sometimes two-hour battles. I generally lost these battles; my arms weren't as big and strong as Chris's were.

On this night, ten years and one day ago now, we eventually grew tired and decided to call it a night. We hugged goodbye. And then I did the strangest thing I have ever done in my safe, meek little life. Without warning, running on adrenalin, I stood on my toes and I kissed Chris on the cheek.
"That was different," he looked surprised. But then he dipped his head and kissed me on the forehead. And that was enough bravery for me. I squeaked a feeble "Goodnight!" and ran inside.

I would spend the next 48 hours imploding and agonizing over every last detail with my best friends. I would attend a Thursday night choir rehearsal at Church where Chris happened to be doing some tech support a few rooms away, and I would become so overwhelmed that I would walk out of the choir mid-rehearsal, find Chris in the office, and beg him, "Can we please go somewhere and talk?" I would spend an hour or two sitting in Gelare across from my unrequited crush, blushing profusely, staring at the floor, at my mocha, at the window, anywhere but his face. I would hear the words, "I don't want to date anyone at the moment, but when I do, you're the one." But despite the awkwardness, and my waning bravery, I wouldn't accept that. The signs were there, we were closer than we had ever been, people already assumed that we were a couple. And I don't know how, or when, but the conversation began shifting to hypotheticals: "If we were together" "Let's say we had a fight" "What if it didn't work out" "How would we do this". And then, his eyes burning into mine, he said "You know, I actually can't think of a logical reason why we shouldn't at least try this." Not exactly romantic, but it's our story!

It's pretty awkward transitioning from close friends to something more, but we managed it. We were exchanging I-love-yous 10 days in, and a few days after our first month anniversary, we knew we were getting married, and we knew when. And here we are ten years later, thick in the life that first blossomed with that super awkward kiss on the cheek; raising a baby, renovating a home, loving each other purely and honestly, navigating the highs and lows of life as a team.

The moral of this story is not "Here's how we got together, and we lived happily ever after". This story is my defining moment of bravery. I never would have dreamed that I would be brave enough to do something as bold as kiss a boy on the cheek, no matter how much I liked him. But for one crazy moment, it felt like a risk worth taking. I knew that if I hadn't taken that chance, and he had ended up dating, even marrying another girl, I would have had to live with serious regret. And the idea of that regret scared me more than the idea of rejection.

I want to challenge you to be brave. Heck, I want to challenge me to be brave! I just bet there is something burning inside you right now, a crazy thing that you don't think you have the guts to grab onto. But you do. Brave people aren't born, they are made, one decision at a time. Just try it - do that one crazy thing. It might work, it might not, but either way you will know. Then try the next crazy thing. And the next. Keep challenging yourself, keep trying. You may not end up exactly where you hope to go - but you won't be right where you are now either.

If you want encouragement or a sounding board, validation from someone who's a bit removed from your situation - email me. I would love to be a small part of that journey with you.
flowerz _ in _ her _ hair @ hotmail (dot) com
Posted by Klara Kamilla at 11:56 PM

Email ThisBlogThis!Share to TwitterShare to FacebookShare to Pinterest
Labels: Musings

Klara Kamilla
I'm an Aussie wife who loves flowers, colours and good coffee. I married a Californian computer-nerd who is the love of my life! Together we created the cutest baby in the universe and I spend my days taking care of him in our always-a-work-in-progress little home. Life is good. Really really good.